Eamonn Holmes has apologised after sparking a backlash over a comment he made about This Morning’s resident doctor Zoe Williams’ hair.

During Thursday’s edition of the ITV daytime show, Eamonn spoke to Dr Zoe via video-link, where she said they’d be involved in a discussion about how gardening and keeping alpacas can both have health benefits.

“Your hair reminds me of an alpaca today,” Eamonn then told her. “You just want to pet it, don’t you? It’s very alpaca-ish.”

After laughing off Eamonn’s comments, the GP then told him: “Don’t touch my hair!” 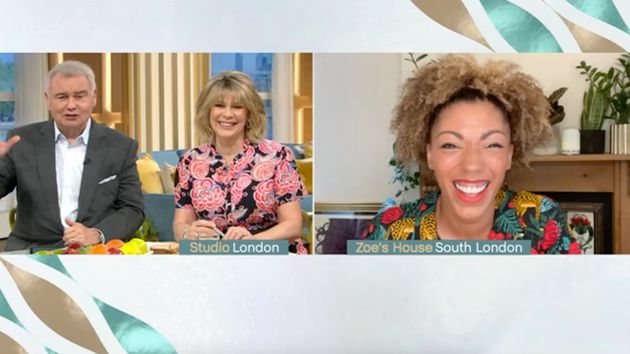 Shortly afterwards, footage of the exchange was circulated on social media, with many viewers criticising Eamonn for his inappropriate comments about a Black colleague’s hair:

This is why MANY black women avoid wearing their natural hair to work … even on Zoom in the comforts of their own home. Eamonn… disgusting. https://t.co/l8zNtu5PPT

@thismorning did @EamonnHolmes just compare the doctors Afro to an alpaca?!? 😠😒😐 #ThisMorning

He is the worst omg https://t.co/JlplJ8LW9l

Eammon Holmes to woman with afro hair (a Doctor appearing on the show): your hair reminds of an alpaca. You just want to pet it don’t you?

This man is persistent in this

I walked into the room and heard the end of the conversation on @thismorning and thought ‘for real?!’ He said he wants to pat her Afro hair?!! 🤦🏾‍♀️Black woman are not animals @EamonnHolmeshttps://t.co/D1OKgiIJK8

The charming Eamonn Holmes who called Meghan Markle “uppity” on tv and that she’s “awful, woke, weak, manipulative and spoilt”, admitting he has never met her

Poor lady who had to smile to not be labelled. But I’m not surprised by his micro-aggression https://t.co/8cwGULdpZG

@thismorning How can @EamonnHolmes@RuthieeL compare @DrZoeWilliams hair to an alpaca, she is a whole Dr talking about health and you make it about hair. It’s not right. 5 minutes later you talking about body confidence. So wrong!!! Micro aggression #microaggression not funny

“Your hair looks like an alpaca”#eamonnholmes was totally out of order on #thismorning but Dr Zoe Williams handled it so well.#donttouchmyhair

Did @EamonnHolmes actually just tell the GP on @thismorning that she had hair like an alpaca and he just wanted to pet it? Wow.

Really just saw Eamonn Holmes comparing a black woman’s hair to an Alpaca “You just want to touch it, don’t you?” ….

Eamonn Holmes comparing a black woman’s hair to an Alpaca’s ! “You just want to touch it, don’t you?”

to which she responds, “Don’t Touch My Hair !” good on ya #ThisMorning

Oh @EamonnHolmes telling a black woman her hair is like an alpaca and he wants to pet it 🤦🏻‍♀️
Christ almighty. @thismorning

what on EARTH. Did you say to her @EamonnHolmes how disrespectful @DrZoeWilliams your hair is beautiful. #donttouchmyhairhttps://t.co/Q3rlgtlvb4

Why is he commenting on her appearance? This is just unacceptable @thismorning#thismorning#eamonnholmeshttps://t.co/2aVzqMXXmH

Eamonn subsequently issued a response, telling his followers: “Hey everyone out there. If my attempt at being humorous with my friend @DrZoeWilliams was misjudged I am mortified and humbly apologise to anyone who was offended.”

Hey everyone out there. if my attempt at being humorous with my friend @DrZoeWilliams was misjudged I am mortified and humbly apologise to anyone who was offended.

This is far from the first time that Eamonn’s on-air remarks have led to controversy.

Last year, he was heavily criticised when he described Meghan Markle as ”awful, woke, weak, manipulative [and] spoilt″ on his talkRadio show, stating: “I’ve never met her – but I look at her and I think ‘I don’t think I’d like you in real life’.”

Prior to this, he was criticised for branding the Duchess of Sussex “uppity” on This Morning, and while a spokesperson for the show said this had been a “point of learning” for the presenter, Eamonn later insisted that he “hadn’t learnt anything” from the incident.

Early in the pandemic, he also sparked a response from Ofcom when his comments about a debunked 5G conspiracy theory incited hundreds of complaints to the TV watchdog.

This Morning airs every weekday from 10am on ITV.