As the Covid-19 pandemic stretches into yet another phase and the delta variant has created more uncertainty and anxiety, the surge in anti-Asian racism because of the coronavirus also shows no sign of abating, a new report reveals.

The group received reports of 2,478 new incidents from April to June of this year, bringing the total number of incidents reported since early in the pandemic to 9,081, according to the data released Thursday. Given that the incidents are self-reported, the true number of racist attacks against AAPI people across the country is likely much higher.

“I think we believed we were heading towards bluer skies with Covid, and that might mean less hate that Asian American community members would face,” Manjusha Kulkarni, Stop AAPI Hate co-founder and executive director of the Asian Pacific Policy and Planning Council, told HuffPost. “But then it didn’t dissipate, and of course now, even with the disease, we’re talking about a huge surge. So looking forward, we have a lot of concerns about what that surge means in terms of the hate and discrimination.”

Nearly two-thirds of the incidents were reported by women, consistent with previous patterns and reflective of the ways AAPI women routinely face a toxic combination of racism and misogyny. Throughout the time Stop AAPI Hate has been collecting these reports, the two most common kinds of incidents have involved verbal harassment and shunning or purposely avoiding AAPI people in public. Most of the incidents have taken place at businesses or on public streets. 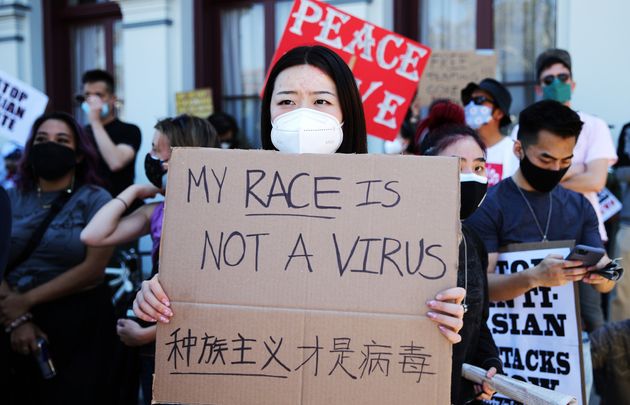 In one incident report, the respondent wrote that during a Zoom event, “a number of people hacked into the Zoom room and started disrupting my presentation with barely intelligible remarks.” One of them wrote into the Zoom chat window: “‘CHING CHONG. ASIANS DESERVES [sic] TO BE KILLED.’”

Another respondent in New York City reported an incident involving “an elderly Asian grandmother using a shopping cart as a walker. A man knocked her over and then kicked her shopping cart.”

Kulkarni noted that it’s possible some of the increase can be attributed to more people feeling encouraged to report their incidents of racism because of increased national attention and awareness.

The group has received incident reports from every US state and the District of Columbia. The two states where the greatest number of incidents have taken place are California (38.6%) and New York (16%), both of which contain large and diverse AAPI populations.

It has to be a multifaceted approach. It has to be federal, state and local governments really doubling down on protecting our communities. And so that includes driving resources to Asian American communities and creating programs to address some of the foundational issues.Manjusha Kulkarni, Stop AAPI Hate co-founder and executive director of the Asian Pacific Policy and Planning Council

Almost half of the incidents involved the perpetrator saying “at least one hateful statement regarding anti-China and/or anti-immigrant rhetoric.” In Thursday’s report, the researchers found that the rhetoric tended to fall into one or more of the following five categories, all of which have historical roots:

Kulkarni said she’s concerned about potential attacks targeting young AAPI people as they start going back to in-person schooling in the coming weeks. She’s also concerned about the possible ramifications of an upcoming report from US intelligence officials on their investigation into the origins of Covid-19, ordered by President Joe Biden.

She urged Biden and his administration to be careful of the language they use to avoid further inflaming tensions and misinformation that could lead to more racist rhetoric and scapegoating.

While there’s much work to be done on many fronts, Kulkarni said she feels encouraged by some recent policy developments on the state level. For instance, California legislators allocated $156 million of the state budget toward efforts to combat anti-Asian racism. Called the Asian Pacific Islander Equity Budget, the money will fund various community organisations and will address issues such as mental health, education and restorative justice. (Stop AAPI Hate received $10 million to support its efforts tracking and responding to hate incidents.) Illinois recently became the first state to require schools to include Asian American history in their curricula.

“It has to be a multifaceted approach. It has to be federal, state and local governments really doubling down on protecting our communities,” Kulkarni said. “And so that includes driving resources to Asian American communities and creating programs to address some of the foundational issues.”