A pregnant woman has shared the difficultly she had trying to access the coronavirus vaccine, with a member of staff at the vaccination centre even trying to dissuade her from having the jab.

Ami Amin, 38, from north west London, is approaching 37 weeks pregnant with her second child. She had her first jab at 24 weeks pregnant and second at 29 weeks pregnant, but it was a battle to get the appointments.

“The vaccine was not mentioned and still has not been mentioned once by anybody to me during the entirety of my pregnancy,” she tells HuffPost UK. “I feel quite strongly about it. You can’t just go from zero to 100 and start saying ‘get the vaccine,’ when no one is talking about it.”

An NHS social media campaign is currently encouraging pregnant women to get the jab, following a rise in pregnant women needing ICU treatment due to Covid.

But Amin, and other pregnant women, say midwives are still hesitant about recommending the vaccination to their patients. 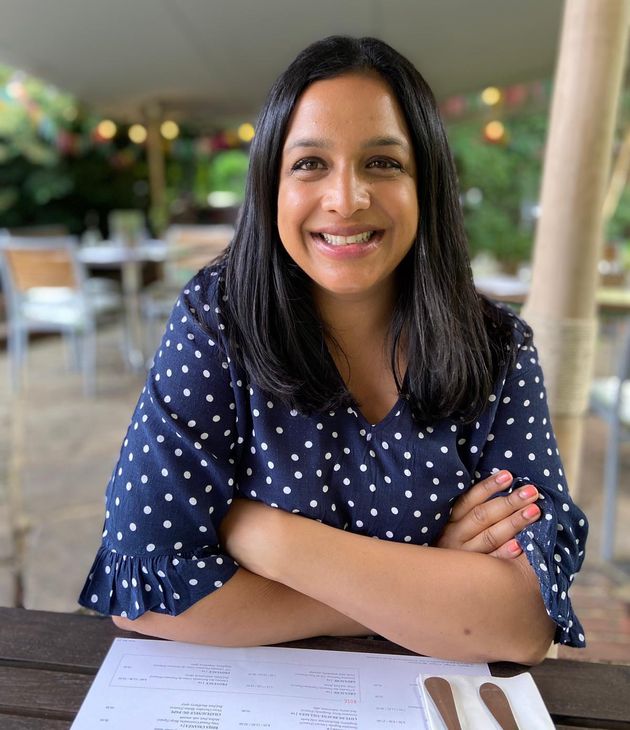 Back in April, the Joint Committee on Vaccination and Immunisation (JCVI)  updated its guidance to say pregnant women should have the vaccine alongside others in their age group.

Amin, who works as a university law tutor, wanted to get vaccinated as soon possible, as she works with younger, unvaccinated students. She felt confident about having the jab after doing her own research and speaking to two trusted friends who are doctors.

Still, she had to call her GP several times before she was given an appointment. “I had to keep calling and pushing it until it happened,” she says. “It felt like I really had to work hard for it. There was no point at which it was made easy for me.”

Once at the vaccination centre, the member of staff assigned to administer her jab was unaware the jab had been approved for pregnant women.

“When I filled out the form to say that I was pregnant, the lady vaccinating me just looked really alarmed,” says Amin. “She said: ’You know that they haven’t confirmed that it’s safe for pregnant people to have the vaccine, don’t you?′

“I got my phone out and showed her a flurry of articles that I had on my internet history, showing that it was now considered safe and actually, it has been for a while.”

Amin doesn’t want to identify the vaccination centre or staff member, because she doesn’t think the individual is to blame. Instead, she questions why people working and volunteering at the centres aren’t being given the most up-to-date information.

“When I showed her these articles she just said: ‘Do you know what, I’ve spent every day of every week recently stuck in this vaccination centre, so I have no idea what’s going on in the outside world,’” says Amin.

“On the one hand I had sympathy for her, because she’s obviously been working very hard vaccinating people, but on the other hand she clearly didn’t have a clue about the wider issues around vaccinations. I thought: ‘Who are you? Are you even qualified in anything?’ It was worrying that I was going in there with more knowledge than she had.”

Other pregnant women, new mums and their family members have been sharing negative experiences, with some claiming they’ve been actively discouraged from having the vaccine by medical staff.

My own midwife told me I shouldn’t have the vaccine!! Luckily I did my own research & ignored her, but it was a fight to even get the jab as my dr kept saying they only had the AZ and I needed the phizer. In the end I had my 1st at 34 weeks 2nd at 2 weeks after baby was born.

My 33 year old daughter, a school teacher, is 6 months pregnant and has been advised by both her midwife and consultant – from the offset – *not* to have the vaccine. She has been in touch with her midwife. Still waiting on response from consultant.

Similar here. My daughter is due to give birth in two weeks and has been advised by medical staff not to have the vaccine until after the birth. We are a pro vaccine family but if that’s what doctor says…🤷‍♀️

This is awful. As a person who has recently had my first vaccine (at 6mos pregnant), it was a stressful experience; midwife actively advised against it, and staff at vaccine centre seemed very anxious about administering it. So glad I had the guts to do it.

Research from Oxford University found one in 10 pregnant women admitted to hospital with symptoms of Covid-19 require intensive care and 99% of hospitalised pregnant women have not been vaccinated.

Pregnant women who test positive for Covid at the time of birth are also more likely to develop pre-eclampsia, need an emergency caesarean and have higher rates of stillbirth – although the overall risks do remain low.

This is why midwives are being urged to recommend the jab to their patients. So why aren’t they doing this?

HuffPost UK contacted the Royal College of Midwives to share Amin’s experience. A spokesperson said they could not comment on an individual case, but emphasised that the RCM recommends the vaccine in pregnancy based on all the current evidence.

“Getting the vaccine is the best way to protect you and your baby against Covid-19. It really is that simple. Hundreds of thousands of pregnant women worldwide have been vaccinated, safely and effectively protecting themselves against Covid and dramatically reducing their risk of serious illness or harm to their baby,” they said.

“It’s so important for pregnant women to get their jab, particularly with the virus being so prevalent and the Delta variant proving itself to be so much more transmissible. If you have questions, talk to your midwife, talk to your obstetrician, talk to your GP. Get the answers you need and get the jab.”

Gill Walton, chief executive of the RCM, reiterated earlier calls for midwives and other antenatal staff to ease women’s worries about the vaccine.

“We know midwives and maternity staff are under huge pressures with staffing shortages and they are stretched, but we cannot stress enough how important it is for all maternity staff including midwives to keep up to date with official advice and guidance,” she said.

“Midwives have a very clear duty of care to women and their families which is set out by their regulator to provide women with evidence-based facts and not their own personal beliefs.”

Amin says she understands why some pregnant women are worried about the vaccine, particularly given the mixed messages they’ve received. But she’s concerned that some will decide against having the jab based on misinformation.

“I know you can’t force pregnant women to have the vaccine, but it should at least be a question at your first booking appointment, so that then if you’re not having the vaccine, that can be taken into account as well,” she says.

“Other underlying health conditions are considered very important. They monitor you for so many other potential things, so Covid shouldn’t be ignored. There’s nothing on my notes anywhere that says ‘she’s had a vaccine’. I think it needs to form part of the process from the get-go.”

Rudy Giuliani Resorts To Selling Cameo Videos For £150 Each

Rudy Giuliani Resorts To Selling Cameo Videos For £150 Each